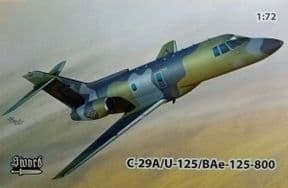 The U-125 started out as the dH125 Jet Dragon, designed by de Havilland and first flew in 1962. It later on became the BAe 125 and was a popular business jet. BAe sold its business jet division in 1993 to Raytheon and then became Hawker Beechcraft in 2007, who went bankrupt in 2013. The BAe 125 was popular both as a business jet and in military service, where it is and was used to transport senior military personnel and heads of state. The U-125A is a Hawker Beechcraft built variant, which is radar equipped and used for air search and rescue missions in Japan by the Japanese Air Force.

Sword's kit of the U-125A is nicely detailed with engraved panel lines and should make a nice model when completed. There are markings for two aircraft of the USAF and JASDF. The kit also comes with an Eduard canopy mask