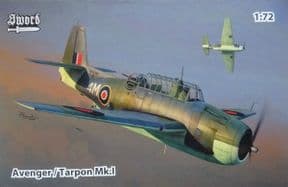 The TBF-1 was the first Grumman TBM Avenger in service and first saw action in the Battle of Midway, June 1942. Six TBF Avengers were based on Midway and launched an attack on the Japanese carriers that was easily repulsed. The Avenger replaced the obsolete Devastator in the USN carrier airgroups following Midway and went on to have an excellent service record in WW2 with both the USN and Royal Navy.

The TBF Avenger was known as the Tarpon Mk.1 in Royal Navy service but reverted to its US name of Avenger.

This is Sword’s model of the TBF-1. Sword is a manufacturer based in the Czech Republic. The kit is injection moulded in plastic and the level of detail is excellent with engraved panel lines. There are decals for 2 aircraft from the Royal Navy based on HMS Illustrious and RNAS Machrihanish