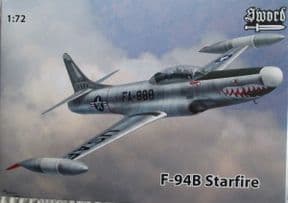 IN STOCK
WAS: £17.99
OUR PRICE:£15.30
The F-94 Starfire was the first USAF all weather jet powered fighter aircraft. It was based on the T-33 Shooting Star 2 seat trainer and featured a lengthened nose with guns, radar and automatic gun sight as well as a more powerful engine to compensate for the additional weight. Later models had the guns replaced by air to air rockets. It entered service in 1950 but was retired by the USAF in 1959 and the ANG by 1960, as superior all weather fighters were in service.

This is Sword’s model of the F-94B Starfire. Sword is a new manufacturer based in the Czech Republic.  The kit is injection moulded in plastic and it includes a set of colour phot etch metal parts, mainly for the cockpit detail. The level of detail is excellent with engraved panel lines.

There are markings for 3 planes of the USAF, including 2 used in the Korean War.
Write an online review and share your thoughts with other shoppers!