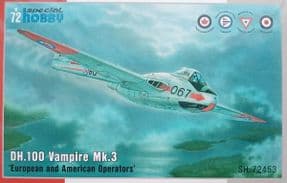 The de Havilland Vampire was the second jet fighter to serve with the RAF, entering service in 1945 just after WW2.

Vampires served with RAF front line squadrons until 1953 and survived in training roles until 1966. The Vampire was built in many versions and served with many other Air Forces around the world. There was also a naval version of the Vampire and further development led to the Venom and Sea Venom.

The Special Hobby Vampire kits are the best Vampire kits in 1/72 and are well detailed and well engineered. This kit has decals for 4 different aircraft of the RAF, RCAF, RNOAF and Mexican Air Force.