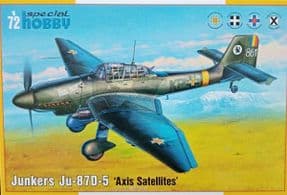 The Junkers Ju87 Stuka was a famous dive bomber in service with the Luftwaffe during WW2. Their main role was to support the army and act as flying artillery, delivering pin-point bombing attacks where needed. In this role they were hugely effective but the Battle of Britain, proved that to be effective, enemy fighter cover had to be neutralised. The Stuka also proved deadly in the anti-shipping role, sinking many merchants and warships.
Later versions such as the D, featured many improvements such as a more powerful engine, more streamlined nose, better defensive guns but they were still vulnerable to enemy fighters. Stukas were fitted with a pair of 37mm Flak cannons and were used with great success against armoured vehicles. Towards the end of the war Stukas were being largely replaced by the much more capable Fw190F/G fighter bombers.

Special Hobby are a Czech based manufacturer and this is their 1/72 Ju87D kit. The plastic parts are by Academy, with new sprue of plastic parts by Special Hobby. There are also a few optional photo etch metal parts and decals for 4 aircraft of Hungary, Romania, Slovakia and Bulgaria