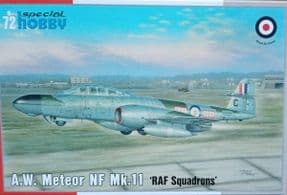 The Gloster Meteor was the first jet in service with the RAF, with the Mk 1 and 3 entering service during WW2. The improved Mk 8 with more powerful engines entered service in 1949.

It was used in Korea by the RAAF but was found to be inferior to the MiG 15. Despite this the Meteor was still a useful aircraft both in the fighter role and fighter bomber role. The Israeli air force was another famous user of the Meteor, which they used in conjunction with the Dassault Ouragan. Armstrong Whitworth modified the Meteor with a lengthened nose, with radar and created the Meteor Night Fighter. It was made in four versions the NF.11, 12, 13 and 14, each with small differences.

This is an all new tool kit and looks excellent, in common with other recent Special Hobby Kits. This kit is injection moulded plastic with and it looks quite well detailed with fine engraved panel lines with decals provided for 4 different RAF aircraft