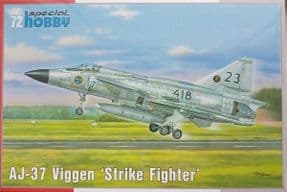 The Saab Viggen was a multi role combat aircraft, that was in service with the Swedish Air Force from 1971 to 2005. It augmented and then superseded the earlier Saab Lansen and Draken to become the main fighter and strike aircraft in the Swedish Air Force until the arrival of the Saab Gripen. The Viggen was first aircraft built in numbers to feature canards and was easy to maintain, reliable and could take off and land on short runways and even motorways. It provided years of excellent service for the Swedish Air Force and is a popular aircraft with enthusiasts.  The AJ-37 was the strike fighter version of the Viggen.

Special Hobby are a Czech company who have been producing limited run kits of subjects not always covered by the mainstream model companies but the recent releases, like their P-40 kits are as good as any mainstream company can make. This is an all new kit of the Saab Viggen and it looks excellent, as do all of Special Hobby's recent releases. The kit comes with decals for 3 aircraft in camouflage and non camouflage finishes.