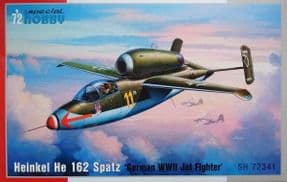 The He162 was an attempted to have a simple mass produced jet fighter that could be flown by inexperienced pilots. It was made largely of wood and glued together and the development was very quick. Its design was chosen in late September 44 and the first prototype flew less than three months later. It was deployed to an evaluation group in January 1945 and first saw combat in April. The aircraft had mixed results, some were lost due to failures with the glue used but did score combat kills, as well as combat losses. Test pilots felt the aircraft was potentially a good fighter and any problems were due to the rapid development and not any inherent design issues with the airframe.

This is the new He162 kit released by Special Hobby, is probably the best He162 kit in 1/72 currently and is as good as the best kits around.