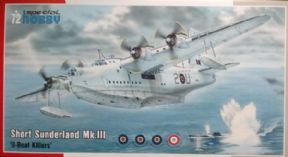 OUT OF STOCK
WAS: £42.80
OUR PRICE:£37.92
Sorry, this item is out of stock.
If you would like to order it, please email us with the product details above this message and the number you want. We will get back to you with a current price, shipping cost and likely delivery date.
Please also let us know if you´re outside the UK so we use the correct postage rates.

The Short Sunderland was a large and very successful flying boat from WW2. It first flew in 1937 and eventually retired in 1967. It served with RAF's Coastal Command as well as the RAAF, RNZAF and French Navy. It possessed a long range and could be equipped with radar and was an effective patrol and anti submarine aircraft. It could carry bombs and depth charges for attacking submarines and had many machine guns to defend itself. The Germans nicknamed it the 'Flying Porcupine' due its defensive fire. It served postwar, notably as part of the Berlin airlift, the Yangtze Incident and the Korean War.
Special Hobby are a Czech company who have been producing limited run kits of subjects not always covered by the mainstream model companies but the recent releases, like their P-40 kits are as good as any mainstream company can make. This is probably now the best Sunderland kit on the market and features a high level of detail, inside and out. There are a few etch and resin parts and decals for several aircraft from the RAF (RCAF/RAAF) and French Navy.