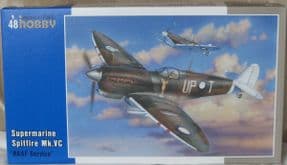 OUT OF STOCK
WAS: £21.99
OUR PRICE:£19.38
Sorry, this item is out of stock.
If you would like to order it, please email us with the product details above this message and the number you want. We will get back to you with a current price, shipping cost and likely delivery date.
Please also let us know if you´re outside the UK so we use the correct postage rates.

The Mk V Spitfire was introduced early in 1941 to counter the German Bf109F and went onto to be the most numerous mark of Spitfire.

The first batch was Mk Va’s with the same 8 machine guns carried by most of the Mk I’s and II’s. RAF pilots had been demanding that fighters should have 20mm cannons to match German fighters, so the Mk Vb was introduced, with 2 20mm cannons and 4 machine guns. The Mk Vb could only carry 60 rounds for each cannon, meaning the ammunition didn’t last long.

The Mk V could also be fitted with a tropical filter, enabling its use in the North African deserts and the Far East

Special Hobby is a Czech based manufacturer and this is their 1/48 Spitfire Mk Vc Trop kit.  This is a detailed injection moulded plastic kit with additional resin and photo etch metal parts.