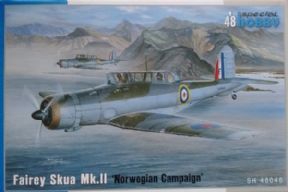 IN STOCK
WAS: £28.99
OUR PRICE:£24.00
The Blackburn Skua was the Royal Navy’s first monoplane and strangely combined the roles of fighter and dive bomber. By the time of WW2 the Skua was totally obsolete as a fighter but still was a useful dive bomber.

The most famous action involving the Skua was when FAA 800 and 803 squadrons, flying from the Orkneys, attacked and sank the German light cruiser Konigsberg, with 500lb bombs in Bergen harbour, Norway. They also saw action in the Dunkirk evacuation.

They were withdrawn from front line service in 1941 when they were replaced by Sea Hurricanes and Fulmars.

Special Hobby is a Czech based manufacturer and this is their 1/48 Blackburn Skua kit.  This is a detailed multimedia kit, consisting of mostly injection moulded plastic parts but with additional resin and photo etch metal parts