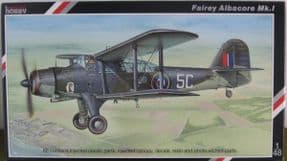 OUT OF STOCK
WAS: £37.99
OUR PRICE:£32.82
Sorry, this item is out of stock.
If you would like to order it, please email us with the product details above this message and the number you want. We will get back to you with a current price, shipping cost and likely delivery date.
Please also let us know if you´re outside the UK so we use the correct postage rates.

The Fairey Albacore was intended as a replacement for the Swordfish.
It had a more powerful engine and enclosed cockpit but never totally replaced the Swordfish which continued in secondary roles and anti submarine work, while the Albacore was replaced by the Barracuda in the front line attack squadrons.
Albacores are most well known for their action in the Mediterranean where they operated from the Aircraft Carrier HMS Formidable.
Albacores from Formidable torpedoed the Italian Battleship Vittiorio Veneto but the Italians managed to affect enough repairs to allow it to escape the pursuing British battleships. They also crippled the Heavy Cruiser Pola, which was not so fortunate.
The Italian Admiral sent Pola's sister ships Zara and Fiume and 4 destroyers back to assist the Pola. However, they were caught at night by the battleships HMS Warspite, HMS Valiant and HMS Barham and utterly obliterated.

Special Hobby is a Czech based manufacturer and this is their 1/48 Albacore Mk I kit. This is a detailed multimedia kit, consisting of mostly injection moulded plastic parts but with additional resin and photo etch metal parts.