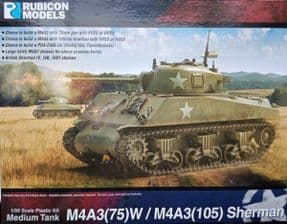 The M4 Sherman tank is probably the most famous tank ever made. Nearly 50000 were made in 1942-5 in US factories and it became the most common tank in WW2 amongst the Western allies and a number were even supplied to Russia. It was made in many versions and converted into other roles and has seen action in wars and conflicts up to the 1980's. The Sherman IV or M4A3 had the Ford V8 engine and became the preferred model for the US Army.

The M4A3(75)W had a 75mm M3 gun, 47° glacis with large driver hatches. It shifted ammunition lockers to hull floor in water-glycol jacketed lockers to decrease risk of fire, known as “wet stowage”. A total of 2,420 were built between February and December 1944, and an additional of 651 being built as M4A3(75)W HVSS between January and March 1945.

This kit contains one model with decals, that can be made as any of the following - M4A3 with 75mm gun with VVSS or HVSS. M4A3 with 105mm howitzer with VVSS or HVSS. POA-CWS-H5 (M4A3(105) Flamethrower). Large hatch M4A3 chassis for above possible builds. British Sherman IV, IVB, IVBY choices. This is suitable for Bolt Action and other 28mm (1/56) WW2 wargames.