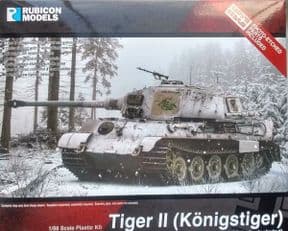 The King Tiger (or Panzer VI, Tiger II) was the largest turreted tank to see service in WW2, weighing in at around 68 tons. It combined the best features of the Tiger and Panther to make the most powerful tank in WW2. It featured sloped 150mm thick armour on the front hull and 185mm armour on the turret, and a long barrel high velocity 88mm gun, which was capable of penetrating over 200mm of armour, making it lethal against any other tank in the world at the time. However only around 400 were built meaning there could never be enough to combat the Allies in the West or East. The other issue was that it had the same engine as the Panther and Tiger but was much heavier, which put a huge strain on the transmission and meant the tank accelerated slowly. Its great weight also limited where it could go but its sheer power meant it was rightfully feared by opposing tank crews.

Rubicon's King Tiger looks an amazing kit for the scale, it's as good as kits in larger scales. With this kit you can depict a King Tiger with the so called 'Henschel Turret', with no Zimmerit coating. You get an optional full interior with crew and optional photo etch grills, plus a decal sheet. If you want it as a gaming model, you can leave out the interior and leave off the PE grills and you'll still probably have the best King Tiger model in 1/56 (or 28mm).
Write an online review and share your thoughts with other shoppers!