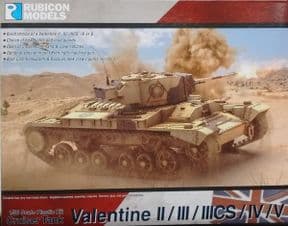 The Valentine was a British tank from WW2. Like the Matilda and Churchill it was classed as an Infantry tank - slow but well armoured tanks for supporting infantry. The Valentine proved to be a sturdy and reliable tank and was made in many marks with a variety of armament. It was used extensively by the British in North Africa but was also exported in large numbers to Russia, to help make up Russia's heavy early losses in tanks. By the time of D-day it had largely been superseded by the larger and better Churchill tank in the British Army but it continued in service elsewhere.

This kit contains one model with different modelling options, plus decals. It can be made as a Mk II, III, IIICS, IV or V and includes British and Russian tank crew. This is suitable for Bolt Action and other 28mm (1/56) WW2 wargames.
Write an online review and share your thoughts with other shoppers!