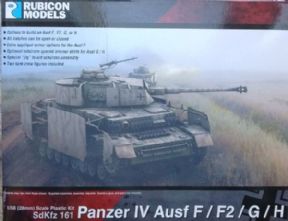 The Panzer IV was originally designed as a support tank with a short barrel 75mm gun, meant for firing explosive rounds at dug in infantry and guns. It was to complement the slightly smaller Panzer III, which was meant to be the main tank of the army. Both the Panzer III and IV were progressively improved but by 1942 it was clear that the Panzer III could not be fitted with a powerful enough gun to deal with the new allied tanks, so the Panzer IV was upgunned and became the main tank of the German armed forces. Even after the introduction of bigger tanks like the Panther + Tiger, the Panzer IV remained in production and service for the rest of the war, still capable of combatting all but the heaviest and best armoured tanks.

This kit contains one model with different modelling options to make 4 different mid and late war versions of the tank and includes decals. This is suitable for Bolt Action and other 28mm (1/56) WW2 wargames.