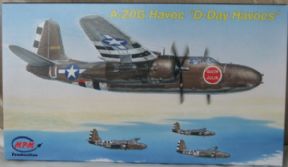 IN STOCK
WAS: £24.30
OUR PRICE:£15.80
The Douglas Havoc was essentially the same plane as the Boston. Some versions were called Bostons and others Havocs. The A-20G Havoc was the main model produced for the USAAF. It dispensed with the bomb aimer in the glazed nose in favour of a solid nose with 6 12.7mm machine guns. This changed it's role from conventional light bomber to a dedicated low level attack plane. It proved very successful and was replaced in service by the even more heavily armed A-20 Invader.

MPM is a Czech based manufacturer and this is their 1/72 Douglas A-20G Havoc. The kit is injection moulded plastic and is well detailed with engraved panel lines. This by all accounts is one of MPM's better kits. It is engineered like other injection moulded kits with locating pins and lugs, so it should be easier to build than other kits by MPM and similar manufacturers.