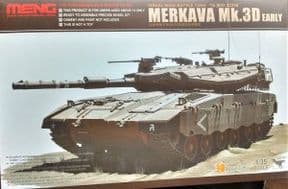 OUT OF STOCK
WAS: £52.99
OUR PRICE:£47.70
Sorry, this item is out of stock.
If you would like to order it, please email us with the product details above this message and the number you want. We will get back to you with a current price, shipping cost and likely delivery date.
Please also let us know if you´re outside the UK so we use the correct postage rates.

The Merkava is the Israeli Army's current main battle tank and has been since the late 1970's. The Israeli army in the 1970's was one of the most experienced armies in the world and had used mainly US and British tanks but their experience led them to design a tank that was ideal for their army and their way of fighting. The Merkava has several unusual features for a MBT. First of all the engine is in the front of the tank. This helps protect the crew as not only do the enemy have to penetrate the tank's front armour but also get through a large engine before the crew compartment. The second feature is as a result of the engine at the front of the tank. The rear of the tank has access doors to the rear compartment and seats for up to 6 passengers. This makes it easier to load up the tank's ammunition and also provides shelter in battle for friendly troops.
The Merkava is among the most heavily armed and armoured tanks in the world. Initially it was armed with the British L7 105mm gun but the Mk III and IV have a more powerful 120mm gun. It has also been heavily armoured from the start but the armour has been upgraded to keep pace with developments elsewhere. Merkava's have carried Blazer reactive armour on top of the normal armour but later tanks will have sophisticated laminate armour. Originally it had a 900Bhp diesel engine but the Mk III and IV have an uprated 1200Bhp engine which increases their speed and mobility. The Merkava is battle proven, with the Mk I's defeating Russian built T-72 tanks with ease in the 1982 Lebanon conflict.
This is a highly detailed plastic kit with photo etch metal parts and individual track links with markings for 2 different tanks. The Meng Merkava is probably now the best Merkava kit in 1/35! There is also a small photo album included with the kit.
Write an online review and share your thoughts with other shoppers!