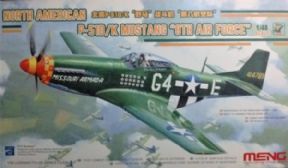 This is Meng's excellent recent tool P-51D Mustang kit, which is highly detailed with engraved panel lines and comes with markings for 2 USAAF P-51's, from the 357th FG, 8th AF.