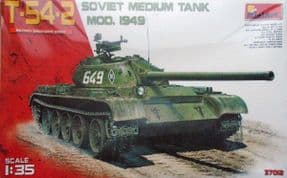 OUT OF STOCK
WAS: £43.99
OUR PRICE:£39.00
Sorry, this item is out of stock.
If you would like to order it, please email us with the product details above this message and the number you want. We will get back to you with a current price, shipping cost and likely delivery date.
Please also let us know if you´re outside the UK so we use the correct postage rates.

The T-54 and T-55 were the Soviet Union's first 'Main Battle Tanks' produced post WW2. At the time they had a good mix of firepower (100mm gun), armour and mobility and replaced the T-34/85 as the main tank of the Soviets and their allies. They have become probably the most produced tank and possibly most widespread. Both tanks have been continually updated and are still in service with some armies. They have seen action in many conflicts with mixed results. They suffered badly at the hands of Israeli Sho't and Magach tanks, which had the British 105mm gun and well trained crews. By they time of the first and second Gulf wars, they were totally outclassed by the US M1 Abrams and British Challenger (1 and 2) but they have still proved a popular tank for armies around the world for their cheapness and reliability.

Miniart are a company from Ukraine with a good reputation for excellent AFV kits.
Write an online review and share your thoughts with other shoppers!