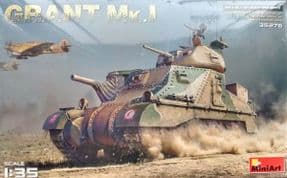 OUT OF STOCK
WAS: £47.99
OUR PRICE:£27.96
Sorry, this item is out of stock.
If you would like to order it, please email us with the product details above this message and the number you want. We will get back to you with a current price, shipping cost and likely delivery date.
Please also let us know if you´re outside the UK so we use the correct postage rates.

The British army urgently needed a new medium tank to fight the German tanks in early WW2. The US army also desired a new medium tank to match other tanks in the world, so the M3 Lee was designed in 1940 and was in service by late 1941. The M3 featured a sponson mounted 75mm gun on the right side of the hull and a small turret with a 37mm gun, plus multiple machine guns. For the time, this gave it considerable firepower and it was initally succesful but once the German tanks got bigger guns mounted in their turrets, the M3 started to be outclassed and was replaced by the superior M4 Sherman.

The Grant was the British version of the M3 with a redesigned turret, which was larger and had a radio fitted. The turret top machine gun mount of the US Lee, was removed and replaced with a simple hatch. The British Army made good use of the Grants from mid 1942 and they proved initially superior to the Pz III's and Pz IV's of the German Army. The Grant's 75mm gun was also very effective against anti tank guns and artillery pieces. It was however, outgunned by the Pz IV when they Germans introduced the longer barrel 75mm gun and also by the Tiger and was replaced by the Sherman when enough Shermans were available. The remaining M3's were then deployed to Burma and India were the lack of decent Japanese tanks or anti tank guns meant the M3 was highly effective, supporting the infantry.

This looks like an excellent kit from Miniart, highly detailed with many parts and would be ideal for an experienced model maker. The tracks are individual links and the model includes some photo etch metal parts and decals for 8 different tanks.
Write an online review and share your thoughts with other shoppers!