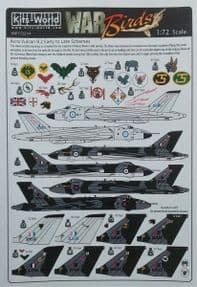 IN STOCK
WAS: £10.20
OUR PRICE:£9.33
Avro Vulcan B.2 Decal sheet.
This sheet includes markings to complete the majority of Vulcans flown in RAF service. The three main schemes are covered as are the main squadrons flying this iconic aeroplane, in service from the early 60s through to the 90s, the last being briefly used in the air-to-air re-fuelling role. You can of course also depict any of the Vulcans flown on the numerous ‘Black Buck’ missions over the Falkland Islands during that 1982 conflict, the only time the Avro Vulcan was used in anger, proving the versatility of this ground-breaking design.
Vulcan Squadrons covered 9th 12th 27th 35th 44th 50th 83rd 101 andD 617 squadrons.
Write an online review and share your thoughts with other shoppers!