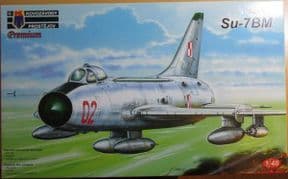 OUT OF STOCK
WAS: £28.99
OUR PRICE:£24.96
Sorry, this item is out of stock.
If you would like to order it, please email us with the product details above this message and the number you want. We will get back to you with a current price, shipping cost and likely delivery date.
Please also let us know if you´re outside the UK so we use the correct postage rates.

The Su-7 was a Russian fighter aircraft that is designed as a low level fighter but it was unsuccessful at this, so became a ground attack aircraft. It entered service in 1959. It was also exported to Warsaw Pact countries and other countries friendly to the USSR. It has seen action in the Six day War, War of Attrition aand Yom Kippur with the Egyptian AD against Israeli forces and by Indian against Pakistan, were it proved a rugged and dependable aircraft but with a small weapons load and range. It was superceded in the 1970's and 1980's by the improved Su-17

KPM are part of AZ Models but are one of the oldest names in Czech scale modelling. The kit features plastic parts by Kopro (with engraved panel lines) with new plastic correction/conversion parts from KP. It also has a fret of photo etch metal parts and decals for several Russian, Polish and Czech aircraft. This kit is not aimed at new or inexperienced modellers, as it will require extra skills and patience than mainstream kits.