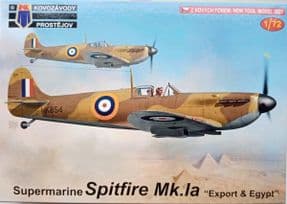 IN STOCK
WAS: £17.99
OUR PRICE:£15.30
First flown in 1936, the Supermarine Spitfire is the most legendary and famous fighter plane in history. It was a complex and high tech plane for the 1930’s and was difficult to produce in numbers at first, however when war arrived the production problems were eventually sorted and it was produced in greater number than any other allied fighter. Indeed it was the only Allied fighter in constant production in WW2. It was also capable of development and this development kept it in line with the best fighters from other nations. The Spitfire rose to fame during the Battle of Britain. Despite the Hurricane being more numerous and shooting down more enemy planes, it was the Spitfire that captured the world’s imagination, something which it still does today.

KPM are from the Czech Republic and are part of AZ Models and this is their brand new tool Spitfire Mk I kit.  It is based on their earlier Mk I/II and Vb kits and as such it is well detailed with fine engraved panel lines and detailed interior. Each of the new kits has the same sprues in it, so you'll end up with lots of extras for the spares box, such as the entire 'B wing', different props and exhausts, tropical filters and even the external fuel tank for the Mk II LR! Only the decals are different in each kit and in each case there are options for 3 different aircraft, in desert camouflage from the RAF, French + Turkish Air Forces.