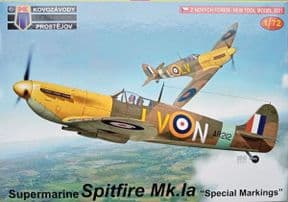 OUT OF STOCK
WAS: £17.99
OUR PRICE:£15.30
Sorry, this item is out of stock.
If you would like to order it, please email us with the product details above this message and the number you want. We will get back to you with a current price, shipping cost and likely delivery date.
Please also let us know if you´re outside the UK so we use the correct postage rates.

KPM are from the Czech Republic and are part of AZ Models and this is their brand new tool Spitfire Mk I kit.  It is based on their earlier Mk I/II and Vb kits and as such it is well detailed with fine engraved panel lines and detailed interior. Each of the new kits has the same sprues in it, so you'll end up with lots of extras for the spares box, such as the entire 'B wing', different props and exhausts, tropical filters and even the external fuel tank for the Mk II LR! Only the decals are different in each kit and in each case there are options for 3 different RAF aircraft, with unusual markings