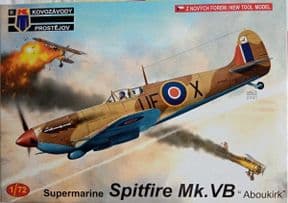 First flown in 1936, the Supermarine Spitfire is the most legendary and famous fighter plane in history. It was a complex and high tech plane for the 1930’s and was difficult to produce in numbers at first, however when war arrived the production problems were eventually sorted and it was produced in greater number than any other allied fighter. Indeed it was the only Allied fighter in constant production in WW2. It was also capable of development and this development kept it in line with the best fighters from other nations. The Spitfire rose to fame during the Battle of Britain. Despite the Hurricane being more numerous and shooting down more enemy planes, it was the Spitfire that captured the world’s imagination, something which it still does today.
The Spitfire Mk V came about as a counter to the Messerschmitt Bf109F. Supermarine were developing the Spitfire Mk III around the Merlin 40 series engine, which produced 1475 Hp but the RAF needed an improved Spitfire straight away. Supermarine managed to fit the Merlin 40 in a Mk I/II airframe and it was successful. It became the Mk V and the plans for the Mk III were shelved as the Mk V could enter production almost straight away with out too much disruption to production lines. The first 100 or so were Mk Va's armed with eight machine guns but the main production models were the Mk Vb, which had two 20mm cannons and four machine guns and then the Mk Vc with a redesigned wing which could carry the same armament as a Mk Vb but with double the cannon ammunition or four 20mm cannons and provision to carry bombs.

This is a brand new tool kit and is not a rebox of the previous AZ Models kit. As such it is well detailed with fine engraved panel lines and detailed interior. Decals are included for 3 different RAF aircraft. Please note the kit comes with standard wings and requires modification to make them clipped wings.