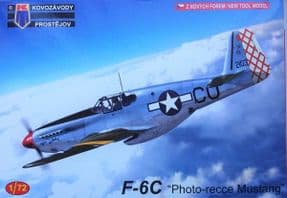 IN STOCK
WAS: £13.70
OUR PRICE:£9.00
The world famous P-51 Mustang was built by North American in response to the British Aircraft Purchasing Commission's request for modern high performance fighters, for use against the Luftwaffe. North American came up with the P-51 which featured the new concept of the Laminar wing. This gave the P-51 a big aerodynamic advantage, meaning an enhanced performance and range. The first Mustangs were powered by American Allinson engines which had poor performance over 15000ft, so they were used in low level roles.
The big breakthrough happened when Rolls Royce fitted one of it's latest 2 stage supercharged Merlin engines, which now gave the Mustang high performance at any range. They also discovered the Mustang had a much greater range and when fitted with drop tanks, could get to Berlin and back and still have fuel to fight with. Mustangs were deployed to the European Theatre from 1944, displacing the Thunderbolt as the main bomber escort. The early Merlin Mustangs were the P-51B and C, the only difference was the P-51B was made at Inglewood, Los Angeles and the P-51C at Dallas, Texas. They were armed with 4 50 cal machine guns and could carry drop tanks or bombs under the wings, top speed was 440mph. Later in the production line the 'Malcolm Hood' was introduced, this was a bulged mid canopy section that improved the pilot's visibility.

With the Mustang the USAAF now had a fighter that could escort the bombers anywhere over Germany and match the German aircraft in combat. It was never the best at any single aspect of air to air combat but it was good at everything and the pilots were very well trained skilled, with many becoming air aces. In fact a lot of Mustang pilots went on to fly F-86 Sabres over Korea and F-4 Phantoms in Vietnam. There is no single plane or weapon in WW2 the probably did more to speed up ending the war in Europe than the P-51. They help grind out air superiority from the Luftwaffe, meaning more bombers got through to damage the German war effort, and there was less threat of air attack to allied armies and more air support to allied armies. The F-6C Mustang had cameras in the lower rear fuselage for tactical photo recce missions.

This is KPM's excellent  P-51B/C kit and it is highly detailed with engraved panel lines, matching the more established mainstream manufacturers.  It comes with markings for 3 USAAF aircraft.
Write an online review and share your thoughts with other shoppers!