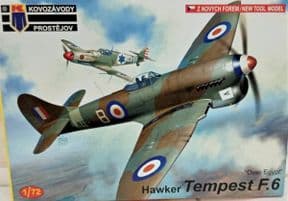 The further-developed Tempest II did not enter service until after the end of hostilities. It had several improvements, including being tropicalised for combat against Japan in South-East Asia as part of the Commonwealth Tiger Force. The Tempest VI also followed the V and featured a more powerful Napier Sabre engine, which required a larger radiator, which meant moving the oil cooler behind the radiator and moving the carburettor air intakes to the inner wing leading edges (similar to the Sea Fury).

KPM are a Czech based manufacturer and part of AZ Models. This is an all new tool kit of the Hawker Tempest. This looks to be an excellent, probably now the best Tempest kit in 1/72. This boxing has decals for three different WW2 RAF aircraft.