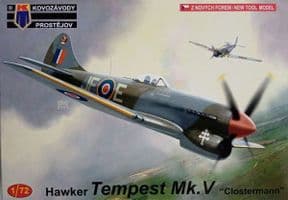 KPM are a Czech based manufacturer and part of AZ Models. This is an all new tool kit of the Hawker Tempest. This looks to be an excellent, probably now the best Tempest kit in 1/72. This boxing has decals for three different aircraft, flown by the French ace, Pierre Clostermann.