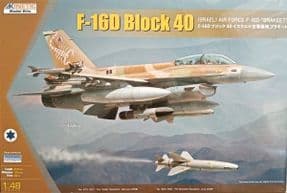 IN STOCK
WAS: £58.99
OUR PRICE:£50.16
The F-16 Fighting Falcon was designed as a lightweight multi-role fighter for the USAF. The F-16 is highly agile and was the first fighter designed to cope with 9g turns. It can carry a wide variety of ordnance and is equally good at attacking ground or air targets. It has been constantly upgraded to keep it at the forefront of military aviation and is in service with over 25 different Air Forces, making it one of the most common jet fighters.

The F-16 has seen action with the Israeli Air Force as well as the Air Forces of Pakistan and Turkey. Several European Air Forces provided F-16's to patrol over Bosnia and Kosovo, and the USAF has used them in both Gulf Wars and Libya. The F-16C entered production in 1984 and features upgraded radar and avionics to use the AIM-7 Sparrow and AIM-120 AMRAAM missiles. The F-16D is a two seat version of the C model and the Block 40 was an upgraded D model that entered service in 1988.

Kinetic are from Hong Kong and are relatively new, they are highly detailed, using engraved panel lines and are known for having plenty of choice for ordnance on the models. Markings are provided for 4 aircraft of the Israeli Air Force. This kit in addition to the usual ordnance like JDAM, Paveway Sidewinder etc, comes with Israeli Ordnance such as Python 4, Spice and Delilah