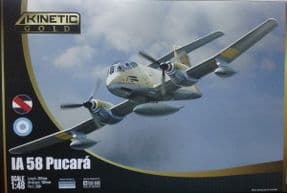 The Pucara is an Turboprop powered Argentine Ground Attack and Counter Insurgency aircraft. It entered service with the Argentine air force in 1975 and has also been used Sri Lankan and Uruguayan air forces. The type saw action in the Falklands war of 1982 and performed some successful attacks, including shooting down a British helicopter - the only confirmed Argentine air to air victory. Pucaras suffered losses while on the ground to bombing, naval gunfire and SAS raids. Other losses included one to cannon fire from a Sea Harrier, a Stinger missile, small arms fire and one also crashed. The remaining ones in the Falklands were captured following the Argentine surrender. The Argentine air force still operate 20 Pucaras.

Kinetic are from Hong Kong and have a range 1/48 aircraft kits. Kinetic kits are highly detailed, using engraved panel lines. There are decals for an Argentine and an Uruguayan Pucara.