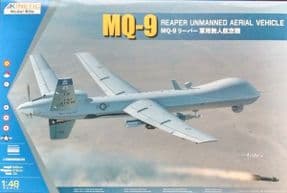 The MQ-9 is an unmanned aerial vehicle used in the Hunter Killer role. It is remotely piloted, powered by a turboprop engine and is capable of carrying Hellfire air to ground missiles and Paveway laser guided bombs, giving it precision strike capability. It first flew in 2001 and early models were meant for surveillance and reconnaissance but in 2007 the first USAF squadron used the MQ-9 to attack targets in Afghanistan.

The MQ-9 is also operated by the RAF, RAAF and the air forces of France, Spain, Italy, Morocco and the Netherlands.

Kinetic are from Hong Kong and are relatively new. They have recently released a range 1/48 aircraft including not only this MQ-9 but different versions of the Harrier, Mirage 2000, F-16 and more. Kinetic kits are highly detailed, using engraved panel lines and are known for having plenty of choice for ordnance on the models.

This model has decals for MQ-9's of the USAF, RAF, RAAF and French, Italian, Spanish and Dutch air forces.