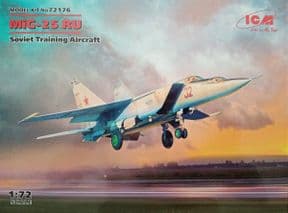 The MiG-25, codename Foxbat, entered service in 1970 and was designed to be a high speed interceptor and reconnaissance aircraft. It could achieve Mach 3.2 but was limited in service to Mach 2.8, to avoid burning out the engines. Even so it's high speed was only bettered by the US SR-71A spy plane. It's capabilities became known to the west, when a pilot defected, with his MiG-25 in 1976. Although withdrawn by the Soviet Air Force in 1991, in was exported to other Warsaw Pact and USSR friendly countries, where it was in service for longer, some are still used today, in limited numbers and flights. It was replaced by the more advanced MiG-31.

The MiG-25RU is a two seat training variant.

ICM are a Ukrainian company who have recently seen a huge improvement in the quality of their kits. The MiG-25 kits are high quality plastic kits with good detail and generally excellent fit of parts and are highly recommended kits. Each kit comes with decals for 2 different aircraft from the USSR and India