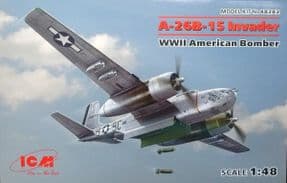 The A-26 Invader was a light bomber and ground attack aircraft that first flew in 1942. It was designed to replace the A-20 Havoc and the 2 main versions were the solid nose A-26B and the A-26C, which has a glazed nose with a bomb aimer and Norden bomb sight for the traditional medium bomber role. The aircraft entered service in 1944 and the crews in the Pacific didn't like the aircraft and preferred the A-20 but in Europe, it was popular with the crews and used to good effect. The A-26 was fast, well armed with heavy machine guns and carried a decent bombload. The A-26 went on to see plenty of service in the Korean War in both it's intended roles. It also saw service in smaller numbers with non US air forces in small localised conflicts around the world, the last to retire the A-26, was the Colombian air force in 1980.

ICM are a Ukrainian company who have recently seen a huge improvement in the quality of their kits. The A-26 kits are high quality plastic kits with good detail and generally excellent fit of parts and are highly recommended kits. This kit comes with decals for three different USAAF aircraft.
Write an online review and share your thoughts with other shoppers!