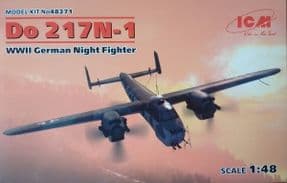 OUT OF STOCK
WAS: £52.60
OUR PRICE:£44.76
Sorry, this item is out of stock.
If you would like to order it, please email us with the product details above this message and the number you want. We will get back to you with a current price, shipping cost and likely delivery date.
Please also let us know if you´re outside the UK so we use the correct postage rates.

The Dornier Do217 was a successor to the earlier Do17/215. It was a much bigger aircraft, with a deeper fuselage and more powerful engines, it had a longer range than the Do17 and some variants could carry a bombload of up to 4000kg. It performed as a Medium and Heavy Bomber, anti shipping aircraft (with guided bombs), reconnaissance and even a night fighter. It was in service from 1941 and was produced in different versions, improving on earlier models as the war went on. The Do217 either powered by BMW 801 radial engines or Daimler Benz DB603 inverted V-12 engines and later models had a fully glazed nose and some had extended wingtips. The aircraft proved stable in flight if a little underpowered, but it did carry a heavy bombload and had some success in operations.
The Do217J and N models were the night fighter and night intruder versions. Both models had a battery of MG's and cannons in the nose as well as radar but the J was powered by the BMW801 and the N by the DB603. The J-1 was an intruder model, with a bomb bay and the J-2 a pure night fighter with no bomb carrying capacity. The N and N-2 were similar and later on many were fitted with upward firing cannons.
ICM are a Ukrainian company who have recently seen a huge improvement in the quality of their kits. The DO217 kits are high quality plastic kits with good detail and generally excellent fit of parts and are highly recommended kits. This kit comes with decals for four different Luftwaffe aircraft.
Write an online review and share your thoughts with other shoppers!