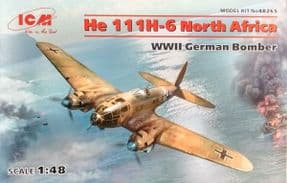 OUT OF STOCK
WAS: £47.80
OUR PRICE:£40.68
Sorry, this item is out of stock.
If you would like to order it, please email us with the product details above this message and the number you want. We will get back to you with a current price, shipping cost and likely delivery date.
Please also let us know if you´re outside the UK so we use the correct postage rates.

The Heinkel He111 was designed as an airliner as the Germans weren't allowed to have an airforce under the treaty of Versailles. It was in secret designed as a bomber but diguised as a civil aircraft. The He-111 first flew in 1935 and was in production for the Luftwaffe until 1944, when more fighters were needed. Early models had a stepped cockpit with a separate glazed nose for the bomb aimer. The P model introduced the feature the He111 became known for, its fully glazed nose which house the pilot and bomb aimer. The P also had DB601 engines, like the Bf109 and Bf110 and was the main version at the start of WW2. The H model started production just before the war in europe started and it quickly overtook the P as the main model.
The He111 operated in every front the Germans fought but it's probably best remembered as the Luftwaffe's main bomber in the Battle of Britain. That battle showed up its weakness in defensive armament. The H model was constantly improved during WW2, starting with more defensive guns. It was also used as a torpedo bomber, paratrooper transport, cargo carrier, glider tug. Later bombers had a dorsal turret instead of the ring mount, bigger bombloads, some were even used to launch V-1's. The most impressive was the He111Z (Zwilling), which was made using two He111's, joined by a central wing section, with a fifth engine. This was for towing the huge Me323 glider transport.
ICM are a Ukrainian company who have recently seen a huge improvement in the quality of their kits. The He111 kits are high quality plastic kits with good detail and generally excellent fit of parts and are highly recommended kits. This kit comes with decals for three different Luftwaffe aircraft, with optional torpedo or bombload
Write an online review and share your thoughts with other shoppers!