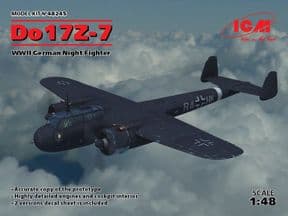 Development continued of the Do17 and there was several night fighter versions, such as the Z-7 and Z-10. These replaced the glazed nose with guns and in the Z-10's case, also an unsucessful infra red system. A further development was the Dornier Do215. This was based on the Do17Z but with DB601 inverted V-12 engines. These were more powerful and performance was much improved. Despite this other types such as the Ju88 were still superior, so the 215 was built in limited numbers, the main versions being the B-4 recconnaissance aircraft and the B-5 Nightfighter. The B-5 had the same infra red system as the Do17Z-10, which proved next to useless, so some were refitted with radar.