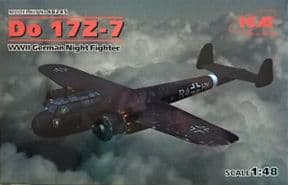 The Dornier 17 was originally designed as a mail carrier with room for 6 passengers but proved unsuitable for that role but it was suggested it could be a fast bomber. The earlier variants had a relatively small cockpit and bomb aimer's position and a slim fuselage and quickly gained the nickname of 'flying pencil'. Early models included the BMW powered E and F, bomber and reconnaissance versions and the DB600 powered L and M. A shortage of DB600's meant the M switched to a Bramo radial engine and the corresponding Bramo powered recce version was the P. The next production models were the Z series. These had the Bramo engines with an all new, enlarged cockpit, with more defensive guns and a greater bomb load. It proved to be underpowered, so the bombload had to be reduced. Despite this the Z-1 and Z-2 were one of the Luftwaffe's main bombers in the early part of the war and took part in large numbers in the Battle of Britain. They took heavy losses over Britain but survivors carried on being used in the Mediterranean and Eastern fronts until eventually being replaced by the superior Ju88.

Development continued of the Do17 and there were several night fighter versions, such as the Z-7 and Z-10. These replaced the glazed nose with guns and in the Z-10's case, also an unsuccessful infra red system. A further development was the Dornier Do215. This was based on the Do17Z but with DB601 inverted V-12 engines. These were more powerful and performance was much improved. Despite this, other types such as the Ju88 were still superior, so the 215 was built in limited numbers, the main versions being the B-4 reconnaissance aircraft and the B-5 Nightfighter. The B-5 had the same infra red system as the Do17Z-10, which proved next to useless, so some were refitted with radar.

ICM are a Ukrainian company who have recently seen a huge improvement in the quality of their kits. The Dornier Do17 and Do215 kits are high quality plastic kits with good detail and generally excellent fit of parts and are highly recommended kits. Each kit comes with decals for two different Luftwaffe aircraft.