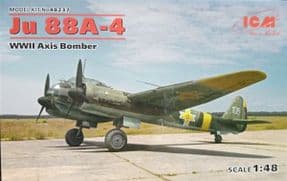 The Junkers Ju88 was one of the most successful aircraft of WW2. Designed as a fast medium and dive bomber, it proved highly adaptable and was probably used in more roles than any other aircraft of WW2. Early bomber and dive bomber versions were used in 1940 in the Norwegian and French campaigns and the Battle of Britain. Despite its relative high speed, it still proved vulnerable to modern single seat fighters and it was soon modified with a heavier armament.

ICM are a Ukrainian company who have recently seen a huge improvement in the quality of their kits. The Junkers Ju88 kits are high quality plastic kits with good detail and generally excellent fit of parts and are highly recommended kits. This kit comes with decals for four different aircraft from Romania, Hungary and Finland.