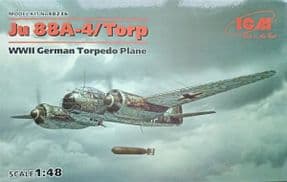 ICM are a Ukrainian company who have recently seen a huge improvement in the quality of their kits. The Junkers Ju88 kits are high quality plastic kits with good detail and generally excellent fit of parts and are highly recommended kits. This kit comes with decals for four different torpedo carrying Luftwaffe aircraft.