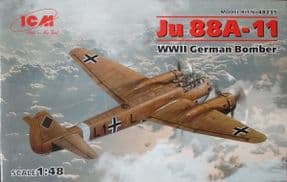 OUT OF STOCK
WAS: £29.99
OUR PRICE:£25.50
Sorry, this item is out of stock.
If you would like to order it, please email us with the product details above this message and the number you want. We will get back to you with a current price, shipping cost and likely delivery date.
Please also let us know if you´re outside the UK so we use the correct postage rates.

It was in action until the end of WW2 and was used in roles such as, ground attack, torpedo bomber, heavy fighter, night fighter. It also was the basis of further developments such as the even better Ju188. The C series of Ju88 were developed from the A series bombers, the main difference was the glazed nose and bomb aimer were replaced with a solid nose with 20mm cannons. It could be used as a heavy fighter (against enemy bombers and patrol aircraft), fighter bomber and night fighter. The A-11 was a tropicalised variant of the A-4.