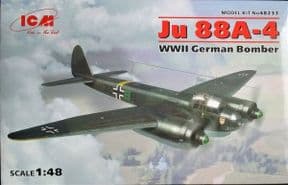 The Junkers Ju88 was one of the most successful aircraft of WW2. Designed as a fast medium and dive bomber, it proved highly adaptable was was probably used in more roles than any other aircraft of WW2. Early bomber and dive bomber versions were used in 1940 in the Norwegian and French campaigns and the Battle of Britain. Despite it's relative high speed, it still proved vulnerable to modern single seat fighters and it was soon modified with a heavier armament.

It was in action until the end of WW2 and was used in roles such as, ground attack, torpedo bomber, heavy fighter, night fighter. It also was the basis of further developments such as the even better Ju188. The C series of Ju88 were developed from the A series bombers, the main difference was the glazed nose and bomb aimer were replaced with a solid nose with 20mm cannons. It could be used as a heavy fighter (against enemy bombers and patrol aircraft), fighter bomber and night fighter. The A-11 was a tropicalised variant of the A-4.