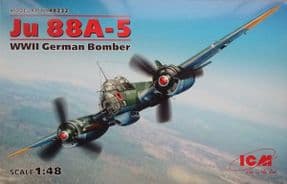 It was in action until the end of WW2 and was used in roles such as, ground attack, torpedo bomber, heavy fighter, night fighter. It also was the basis of further developments such as the even better Ju188. The C series of Ju88 were developed from the A series bombers, the main difference was the glazed nose and bomb aimer were replaced with a solid nose with 20mm cannons. It could be used as a heavy fighter (against enemy bombers and patrol aircraft), fighter bomber and night fighter. The Ju88A-5 was similar to the original A-1 model but with a bigger wingspan. The A-5's first combat operations were during the Battle of Britain.

ICM are a Ukrainian company who have recently seen a huge improvement in the quality of their kits. The Junkers Ju88 kits are high quality plastic kits with good detail and generally excellent fit of parts and are highly recommended kits. This kit comes with decals for four different torpedo Luftwaffe aircraft.