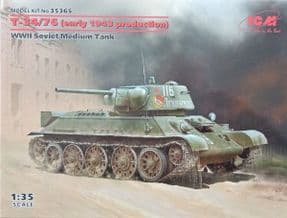 The T-34 was one of the best all round tanks in WW2. It had good sloped armour, a decent gun and good mobility. Early models had a 76mm gun in a two man turret but this proved inadequate against the German Panther and Tiger tanks, so a larger turret was designed, with 3 crew in it and an 85mm gun and was produced from early 1944. This proved able to fight against Panther and Tiger tanks at normal battle ranges. Many tens of thousands of T-34 tanks were produced and it continued in service for many years after WW2, in many armies around the world.

ICM are a Ukrainian manufacturer who’s recent kits are top quality. The kit is injection moulded plastic and is well detailed, decals are provided for 6 different tanks.