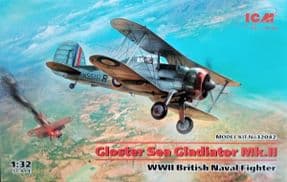 The Gloster Gladiator was the last bi-plane fighter used by the RAF. It was introduced in the late 30’s as insurance against the possible failure of the more advanced Spitfires and Hurricanes. It made up for its lack of performance with its agility and the exploits of the 3 Sea Gladiators known as Faith, Hope and Charity, defending Malta against the Italian Air Force, made it famous. The Sea Gladiator was used by the Fleet Air Arm, prior to them getting more modern monoplane fighters

ICM are a Ukrainian manufacturer who’s recent kits are top quality. The kit is injection moulded plastic and is well detailed with engraved panel lines, decals are provided for 4 different RAF/Royal Navy Aircraft.