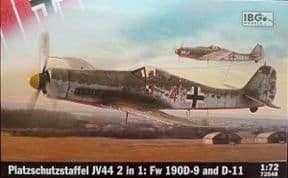 IBG are a Polish manufacturer, who make some excellent model kits. This is the most detailed Fw190D kit ever made and features fine engraved panel lines and a correct wheel bay with views into the engine bay. This kit allows you to make 1 Fw190D-9 and 1 D-11 model. The set comes with additional photo etch metal parts and decals for 3 different Fw190D-9's and 2 D-11's.