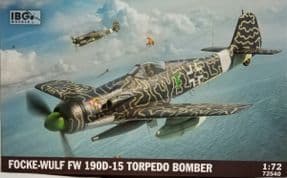 The FW190 first went into service in the summer of 1941. It proved to be much better than the RAF's Spitfire Mk V and soon became known as the Butcher Bird. Early versions suffered from overheating problems, which weren't completely rectified until later models. The Jabo versions were fitted as fighter bombers and could carry 250kg or 500kg bombs under the fuselage.
The D series were interim fighters used as a stop gap measure while the superior Ta152 was being developed. The main difference was that they were powered by a Jumo inverted V-12 engine with annular radiator, instead of the BMW 801 Radial. Performance was greatly enhanced and they were able (with a good pilot) hold their own against the likes of the Mustang and Spitfire XIV.