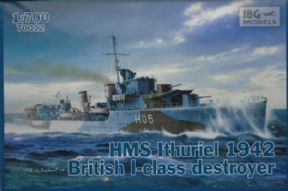 IN STOCK
WAS: £15.50
OUR PRICE:£13.98
HMS Ithuriel was a Royal Navy destroyer that was being built for the Turkish Navy but was commandeered by the Royal Navy, due to it being wartime.. She was part of a second batch of I class destroyers and didn't received all the early war mods of the first batch. The I class were a standard type of RN destroyer and similar to the A through H classes. She commissioned in early 1942 and deployed to the Mediterranean, escorting Malta convoys. She was bombed and damaged beyond repair later in 1942 and was towed to Gibraltar for use as an accomdation hulk, before being sold for scrap in 1944, in Scotland.

IBG's HMS Ithuriel kit depicts her in 1942 when she was on active service. The kit is well detailed and comes with decals and a decent fret of etch metal parts. Note that this is only a waterline kit and has no lower hull.