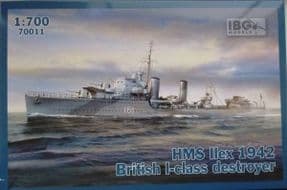 IN STOCK
WAS: £15.50
OUR PRICE:£13.20
HMS Ilex was a Royal Navy I-class destroyer that entered service in 1937. On the outbreak of WW2 she was in the Mediterranean but was soon recalled to home waters for convoy escorted duty and along with HMS Imogen, sank the U-42. In 1940 she was redeployed to the Mediterranean where she saw plenty of action. Ilex and other destroyers were involved in sinking at least 4 Italian submarines between 1940 and 1943, as well as plenty of convoy escort duty. She also participated in the sinking of the Italian cruiser Colleoni by HMAS Sydney, escorted HMS Illustrious during the Taranto attack, took part in the Battles of Calabria and Cape Matapan. She suffered major structural damage in June 41 after being attacked by Dive Bombers and was out of action for over a year. After a full repair and refit in the US, she was deployed to Freetown (Sierra Leone) for convoy duties before returning to the Mediterranean to take part in the Sicily and Salerno landings. She was withdrawn from service at the end of 1943, essentially being worn out. She spent the rest of the war laid up and was going to be repaired but in April 45 it was decided she was no longer required. She was eventually sold for scrap in 1946 and broken up in 1948.

IBG's HMS Ilex kit depicts her in 1942 when she was on active service. The kit is well detailed and comes with decals and a decent fret of etch metal parts. Note that this is only a waterline kit and has no lower hull.