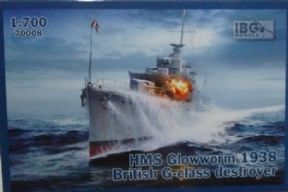 IN STOCK
WAS: £15.50
OUR PRICE:£14.00
HMS Glowworm was a G class destroyers built for the Royal Navy which entered service in 1936. The G class were a standard type of RN destroyer and similar to the A through I classes. HMS Glowworm differred from her sister ships, as she was fitted with quintuple torpedo tubes instead of the standard quadruple tubes. HMS Glowworm is famous for ramming the German Heavy Cruiser, Admiral Hipper, after receiving heavy damage from the much bigger German ship, during the Norwegian campaign of April 1940. As a result of the action, Glowworm sank after infllicting serious damage to Admiral Hipper's hull. Glowworm's commander (who died as a result) was the first person to be awarded the VC in WW2 after being recommended for the award by Admiral Hipper's captain.

IBG's HMS Glowworm kit depicts her in 1938 but there wasn't many changes to her in WW2, due to her being sunk early on. The kit is well detailed and comes with decals and a decent fret of etch metal parts. Note that this is only a waterline kit and has no lower hull.